Rembrandt’s oil painting is back… in China? 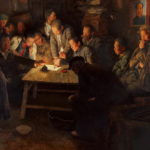 While in the West, “modern” artistic expression has degenerated into vibrant eulogies on the “Eros/Thanatos” theme (sex/death), Chinese artists have been encouraged to revive the most uplifting forms of art, often combining classical universal geniuses with their own historic traditions.

A case in point is Wang Shaolun (born 1968), whose “realistic” paintings, including beautiful portraits of women, are rejected by western critiques as remnants of “social realism”. It is true that, even when the country is rapidly becoming an industrial giant and urban residents become richer and richer, this young artist continues depicting farmers.

Following his graduation from the Beijing Central Academy of Fine Arts, Shaolin, sponsored by the Chinese government, could finish his training at the world famous Repin Art Academy of Saint-Petersburg. Recently, Shaolin was commissioned by the Chinese government to paint several life-size oil paintings for museums in major cities, as well as for national celebratory events.

On Nov. 18, CGTN, presented Shaolun’s 1999 work titled: « Xiaogang, The Night Of November 24, 1978 » depicting a night scene in a rural farming village in Anhui Province. “That evening, 18 farmers signed an agreement that would change the course of agriculture in China.” writes CGTN. Before 1978, China practiced collective farming. But food shortages due to drought, lack of incentives and other challenges were persistent.

The historical accord was called « The Household Responsibility System (HRS)” and for the first time all allowed individual households to contract land and machinery to produce their own yields. With this new procedure, “Each household sold the government their grain at an official price. But any leftover grain could be sold on the open market at a much higher price.” The new system was one of the key reforms of Deng Xiaoping and a key step of pulling millions out of extreme poverty. As a result, between 1978 and 1984, agricultural output in China almost doubled. The HRS resolved the food scarcity crisis and elevated incomes.

The painting is clearly inspired by Rembrandt’s 1661 oil painting called the “Conspiracy of Claudius Civilis” with the light literately emanating out of the table and illuminating a group of peasants intensively concentrating on accomplishing an act that’s going to change the course of history.