The 1648 Peace of Westphalia, a worldwide financial reorganization 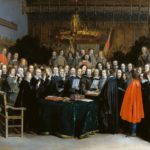 In 1648, after five years of negotiations, led by the French diplomat Abel Servien on the instructions of Cardinal Mazarin, the “Peace of Westphalia” was signed, putting an end to the Thirty Years’ War (1618-1648). Long before the UN Charter, 1648 made national sovereignty, mutual respect and the principle of non-interference the foundations of international law.

The Republic of the Netherlands and the Helvetian Confederation were recognized and numerous bilateral peace treaties put an end to many conflicts.

But that is not all. A careful reader of these treaties discovers that the commitment of all parties to take into account “the advantage of others” as much, if not more, than their own, is translated into concrete acts laying the foundations of a new international financial and economic order.

Article 1 states the fundamental philosophical principle upon which peace rests:

Article 2 goes on to describe the kind of « Global Reset » so urgently needed today:

For decades, most of the belligerents in the Thirty Years’ War inflicted terrible damage on each other, mainly in order to pay off their debts with the spoils of their plunder and conquests, essentially to satisfy a tiny financial oligarchy that lent as generously to one as to another. It is precisely this “enslavement by debt” that the treaty proposes to “bury in eternal oblivion”.

Hence, even before settling disputes and territorial claims, the treaty sets out to create the conditions that will put an end to the financial ruin into which all were descending.

As in the case of other rare “Debt Jubilee”, unpayable, unsustainable and illegitimate debts, interests, bonds, annuities and financial claims, explicitly identified as fueling a dynamic of perpetual war, were examined, sorted out and reorganized, most often through the cancellation of debts (articles 13 and 35, 37, 38 and 39), through moratoria or debt rescheduling according to specific timetables (article 69).

Article 40 concludes that debt cancellations will apply in most cases, “and yet the Sums of Money, which during the War have been exacted bona fide, and with a good intent, by way of Contributions, to prevent greater Evils by the Contributors, are not comprehended herein. » (Implying that these debts would have to be honored.)

Finally, looking to the future, for Commerce to be “reestablished”, the treaty abolished many tolls and customs established by “private” authorities for they were obstacles to the exchange of physical goods and know-how and hence to mutual development. (Art. 69 and 70).

Art. 13:
“Reciprocally, the Elector of Bavaria renounces entirely for himself and his Heirs and Successors the Debt of Thirteen Millions, as also all his Pretensions in Upper Austria; and shall deliver to his Imperial Majesty immediately after the Publication of the Peace, all Acts and Arrests obtain’d for that end, in order to be made void and null.”

Art. 35:
“That the Annual Pension of the Lower Marquisate, payable to the Upper Marquisate, according to former Custom, shall by virtue of the present Treaty be intirely taken away and annihilated; and that for the future nothing shall be pretended or demanded on that account, either for the time past or to come.”

Art. 37:
“That the Contracts, Exchanges, Transactions, Obligations, Treatys, made by Constraint or Threats, and extorted illegally from States or Subjects (…) shall be so annull’d and abolish’d, that no more Enquiry shall be made after them.”

Art. 38:
“That if Debtors have by force got some Bonds from their Creditors, the same shall be restor’d, but not with prejudice to their Rights.”

Art. 39:
“That the Debts either by Purchase, Sale, Revenues, or by what other name they may be call’d, if they have been violently extorted by one of the Partys in War, and if the Debtors alledge and offer to prove there has been a real Payment, they shall be no more prosecuted, before these Exceptions be first adjusted. That the Debtors shall be oblig’d to produce their Exceptions within the term of two years after the Publication of the Peace, upon pain of being afterwards condemn’d to perpetual Silence.”

Art. 40:
“That Processes which have been hitherto enter’d on this Account, together with the Transactions and Promises made for the Restitution of Debts, shall be look’d upon as void; and yet the Sums of Money, which during the War have been exacted bona fide, and with a good intent, by way of Contributions, to prevent greater Evils by the Contributors, are not comprehended herein.”

Art. 68:
“As for the finding out of equitable and expedient means, whereby the Prosecution of Actions against Debtors, ruin’d by the Calamitys of the War, or charg’d with too great Interests, and whereby these Matters may be terminated with moderation, to obviate greater inconveniences which might arise, and to provide for the publick Tranquillity; His Imperial Majesty shall take care to hearken as well to the Advices of his Privy Council, as of the Imperial Chamber, and the States which are to be assembled, to the end that certain firm and invariable Constitutions may be made about this Matter (…)”.

Art. 69 :
“And since it much concerns the Publick, that upon the Conclusion of the Peace, Commerce be re-establish’d, for that end it has been agreed, that the Tolls, Customs, as also the Abuses of the Bull of Brabant, and the Reprisals and Arrests, which proceeded from thence, together with foreign Certifications, Exactions, Detensions; Item, The immoderate Expences and Charges of Posts, and other Obstacles to Commerce and Navigation introduc’d to its Prejudice, contrary to the Publick Benefit here and there, in the Empire on occasion of the War, and of late by a private Authority against its Rights and Privileges, without the Emperor’s and Princes of the Empire’s consent, shall be fully remov’d; and the antient Security, Jurisdiction and Custom, such as have been long before these Wars in use, shall be re-establish’d and inviolably maintain’d in the Provinces, Ports and Rivers. ”

Full texte of the quotes and the Treaty