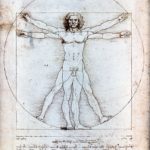 Since I was introduced into the canon of proportions of the human body during my training as a professional painter and engraver, I want offer you some hints on how to look at what is called Da Vinci’s « Vitruvian man », a drawing currently on exhibit at the Da Vinci show at the Louvre in Paris.

Hence, as Leonardo underlines himself in his notebooks, adopting Cusanus wordings, it is only with the « eyes of the mind » that art becomes visible, because the « eyes of the flesh » are intrensically blind to it.

Europe, and Classical Greece, as everybody should know, emerged largely by absorbing several major discoveries accomplished much earlier by other civilizations. Much of it came from Asia, but African and especially Egypt, were key.

The very practice of mummification, a process which takes at least 60 days of work, made Egypt the key area of anatomical research.

As demonstrated by early Egyptian sculpture, the exact size of the entire adult human body is 7,5 times the size of the head. The size of a newborn is only four heads, that of a seven year old, six heads and that of a 17 years old adolescent, 7 heads.

If one subdivides the overall 7.5 proportion, for an adult, from the top of the head till the lowest part of the torso, one measures four heads, one till the nipples, one till the belly button and a fourth one till the lowest part of the pubis. Going up from the sole till the middle of the pelvis, one measures 3.5 heads: 2 heads till the knee and 1.5 till the middle of the pelvis. That brings the total till 7.5 heads for the entire length of the adult human body and it is proportional in the sense that people with smaller heads also have small bodies.

In the Vth Century BC, the Greek sculptor Polikleitos’ spear bearer (The “Doryphoros”) of Naples National Archeological Museum applied this most beautiful canon of proportions, known as the “Polikleitos canon”.

During the Renaissance, the nostalgics of the Roman Empire preferred another Greek canon, that of Greek sculptor Lysippus (4th Century BC), formalized by the Roman author, architect and civil engineer, Vitrivius (1st century BC).

Vitruvius only transcribed the prevalent taste of his epoch. Roman sculptors, in order to give an athletic and heroic look to the Emperors which they were portraying, adopting the canon of Lysippus, could reduce the head of their models to only an eight of the total length of the body. The trick was that by reducing the relative size of the head, the body looked more preeminent and powerful, something most emperors, who were often physical failures, appreciated and secured their popularity. Even extreme cases of 12 to 15 heads of body length appeared. In short, Public relations ruled at the detriment of science and truth.

Vitruvius, the architect, says in his work on architecture that the measurements of the human body are distributed by Nature as follows that is that 4 fingers make 1 palm, and 4 palms make 1 foot, 6 palms make 1 cubit; 4 cubits make a man’s height. And 4 cubits make one pace and 24 palms make a man; and these measures he used in his buildings. If you open your legs so much as to decrease your height 1/14 and spread and raise your arms till your middle fingers touch the level of the top of your head you must know that the centre of the outspread limbs will be in the navel and the space between the legs will be an equilateral triangle.

The length of a man’s outspread arms is equal to his height.

Of course, Da Vinci’s exploration of the Vitruvian man doesn’t mean he approves or disapproves the stated fakery in proportions.

It should be known that in Italy, the pure Roman taste has become trendy again following the discovery in 1506 of the statue of the Laocoon on the site of Nero’s villa in Rome. From that moment, artist will feel obliged to increase the volume of the muscular masses in order to appear as working « in Antique style ».

Although Leonardo never openly criticized this trend, it is hard not to think of Michelangelo’s frescoes in the Sistine Chapel, when the artist, seeking to raise the spirit to unequalled philosophical heights, advised painters: « do not give all the muscles of the figures an exaggerated volume » and « if you act differently, it is more a sort of representation of a sack of nuts that you will have achieved than to that of a human figure » (Codex Madrid II, 128r).

No doubt inspired by his friend, the architect Giacomo Andrea, in « The Vitruvian Man », Leonardo is above all interested by other harmonies: if a person extends his arms in a direction parallel to the ground, one obtains the same length as one’s entire height. This equality is inscribed by Leonardo in a square (symbol of the earthly realm). But if one stretches his arms and legs in a star shape, they are inscribed in a circle whose center is the navel. The location of the navel divides the body according to the golden ratio (in this example 5 heads out of a total of 8 heads, 5+3 being part of the Fibonnacci series: 1+2 = 3; 3+2 = 5; 5+3 = 8; 8+5 = 13; 13+8 = 21, etc.).

Leonardo clearly understood what the golden section really means: not a “magical” number in itself, but the reflexion of the dynamic of least action, the very principle uniting man (the square) with the creator and the universe (the circle).

So if you take a look, beware of what you see and especially what you don’t !